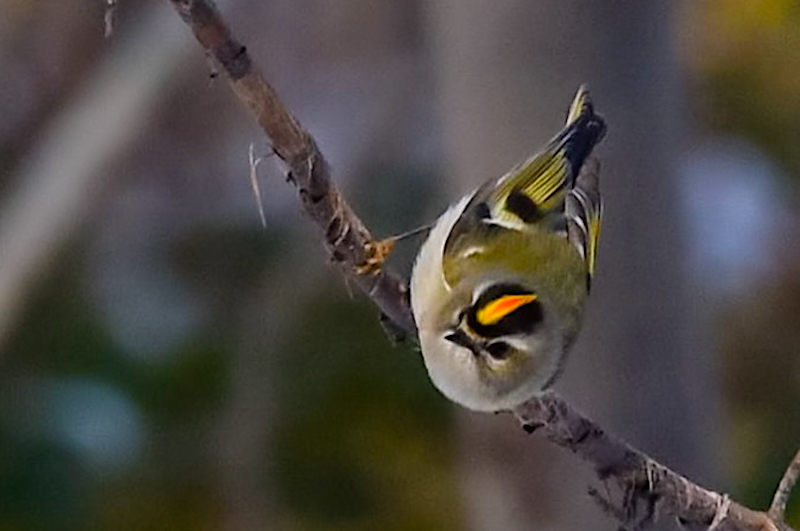 Big things come in small packages, we’re told… and if you’d like some evidence to support that theory, boy-howdy, have I got a potent little parcel for you!

Measuring 3-4″ (8-11 cm) from beak to tail-tip, and tipping the scale at 0.1-0.3 oz (4-8 g), less than 2 cents worth of copper, the Golden-Crowned Kinglet (Regulus satrapa) gives every appearance of being a fitting illustration of fragility. One strong wind would surely blow this saffron-capped, round-bodied, short-winged, skinny-tailed wisp of gray and olive green feathers into the next county like a scrap of litter! And weathering a winter storm? Fuhgeddaboutit! This chick must surely live in a tropical paradise, sheltered like royalty from the harsh realities of life beyond the castle walls.

Don’t be so quick to judge a book by its cover! 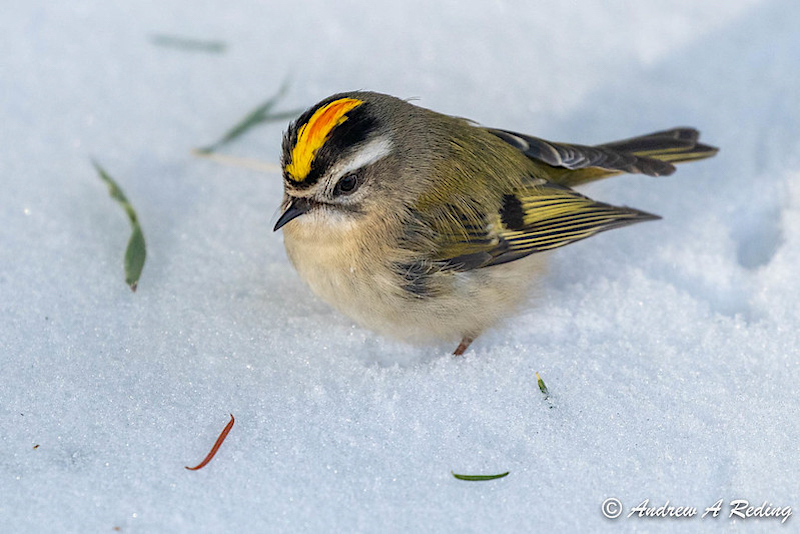 The GCK isn’t an equatorial resident after all — far from it. No, this feathered smidgen with a technicolor mohawk* never leaves North America, although some individuals do migrate from Canada and parts of Alaska to the lower 48 US states and into Mexico. This is no small feat, given their high metabolism and need to feed almost continuously during daylight hours.

Moreover, while their larger mammalian neighbors retreat during inclement winter weather to underground dens or above-ground structures with central heating, Golden-Crowned Kinglets spend those long, frigid nights sleeping beneath the stars, alone or convening with their compatriots to consolidate body heat, even where overnight temperatures drop below -40°F.  Still not impressed?  Keep in mind that smaller creatures lose heat more quickly than larger critters due to their higher surface-area-to-volume ratio.

Although most GCKs are considered medium-range migrants and don’t have summer and winter homes in different hemispheres, they do mark the seasonal shifts with a change of scenery. During the summer breeding season they are exceedingly difficult to spot, spending most of their time in the far upper reaches of tall trees, especially spruce and firs.  For this reason, birders depend on the male’s distinctive song to guide their binoculars. Consisting of up to 14 rising tsee notes that increase in tempo over about 3 seconds, it ends in a warble at least an octave lower. Sadly, though, this high-pitched call is often one of the first bird songs to become imperceptible to human ears as age-related hearing loss erodes our ability to hear sounds in the upper ranges.

GCK winter habitat tends to be less lofty.  At this time of year, these wee creatures can be found in understory shrubs or the lower branches of deciduous trees in parks, cemeteries, and backyards. But since they’re petite, somewhat inconspicuous (if you don’t count their chapeaux), and easy to overlook, here’s handy trick: by repeating a pish-pish sound you can call them in to investigate a potential intruder (and it works equally well on chickadees and warblers). 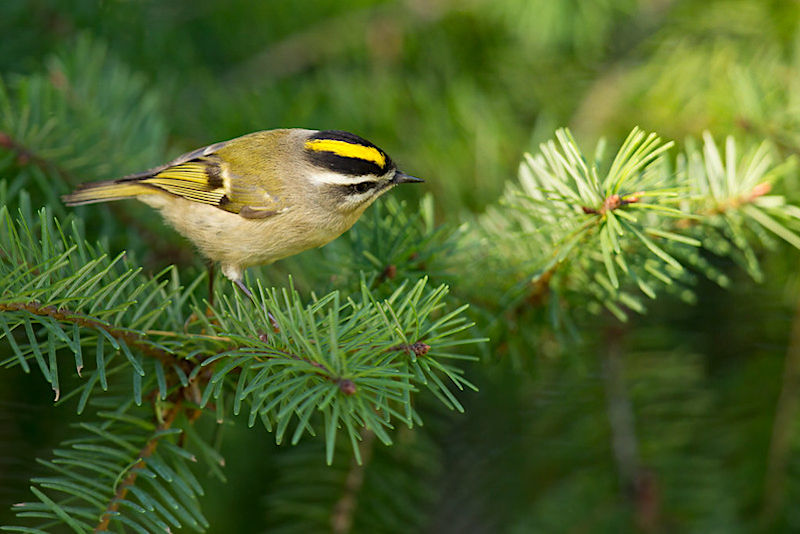 Something else that sets GCKs apart from other songbirds who spend the winter in North America is their diet. Kinglets are obligate insectivores, and therein lies one of life’s great mysteries: How do these birds survive one of the most metabolically challenging times of year, not to mention it’s also the season when their primary food source is most scarce?!

Other species handle the absence of insects by switching to more readily available fruits and seeds, taking advantage of the high calorie provisions found at feeders stocked by backyard birdwatchers. But you won’t find any Kinglets hanging out on easy street.  Even though they must ingest two to three times their weight in insects each day to maintain their internal temperature of 110°F (43°C) and thwart hypothermia, foraging at a fever pitch to achieve that goal, it’s bugs or nothing. 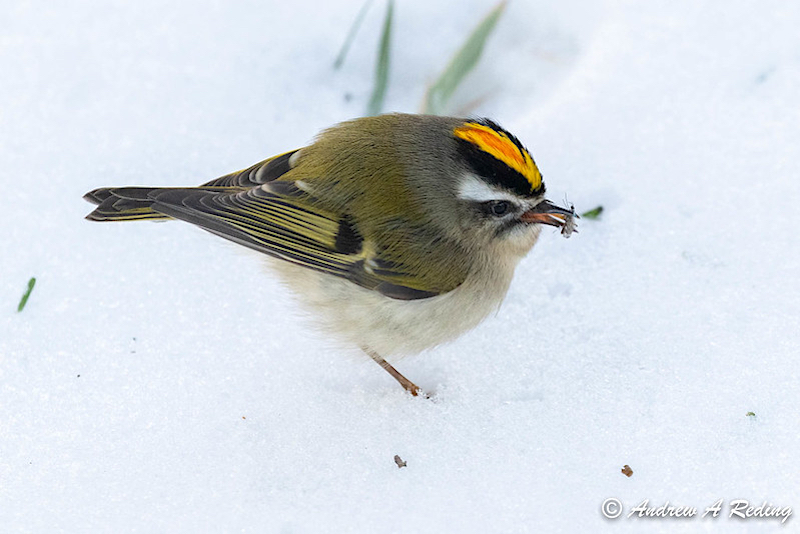 They do switch from things with wings in spring and summer — flies, moths, wasps, grasshoppers, small beetles, gnats, et al. — to a winter diet of torpid caterpillars and inchworms, insect and spider eggs, scale, beetle larvae and other invertebrates tucked into bark crevices, often hanging upside-down from the tips of twigs to improve their access angle. Kinglets will occasionally feed on oozing tree sap but they need to be in dire caloric straits to eat a piece of fruit. 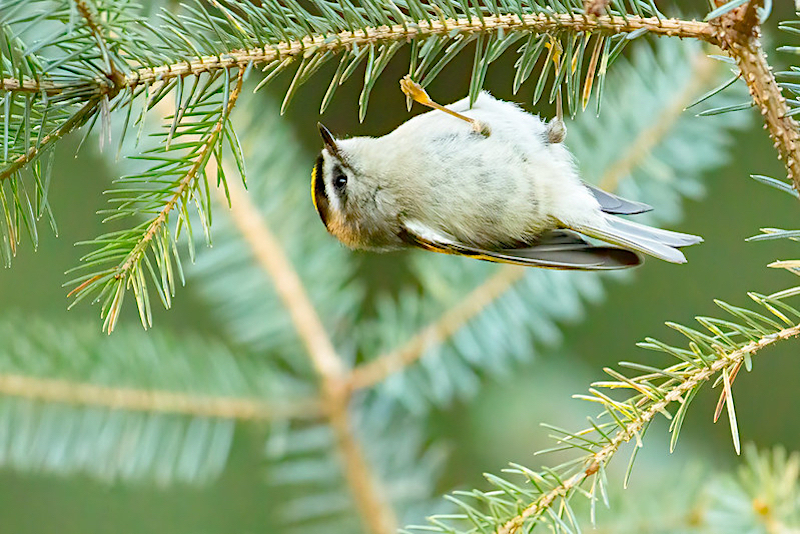 GCKs are a conservation success story, and a pretty dramatic one at that.  Between 1966 and 2014, the population declined by a total of 75%. A less formidable beast might have called it quits, but thanks in part to spruce reforestation programs and a prolific reproduction rate, their numbers have recovered to a global breeding population now estimated at over 100 million. And don’t forget to add adaptability to this species’ many admirable survival skills; although they used to breed only in boreal spruce-fir forests, they’ve recently expanded their breeding territory south into Pennsylvania, Illinois, Indiana, and Ohio.

I’ll sum things up with another saying worth mentioning: The measure of an individual isn’t their height but the stature of their character. Using that ruler the tiny Golden-Crowned Kinglet is a titan. 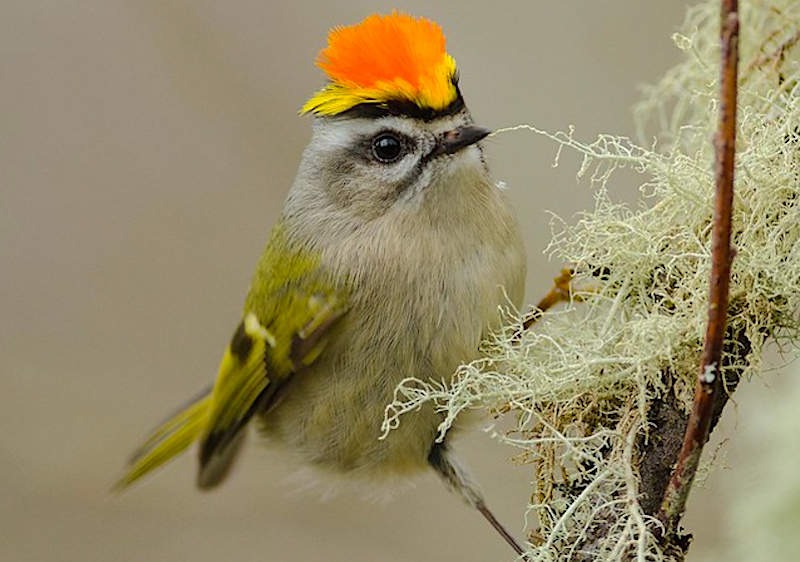