With easy access from I-55, I-44 and I-64, Lafayette Park is located just south of downtown, west of Soulard, and north of Benton Park. Surrounded by the Lafayette Square neighborhood, it is a true pastoral refuge in the city. The main park address is 2023 Lafayette Avenue, St. Louis, MO; 63104. Use the button below for a map and directions from Google 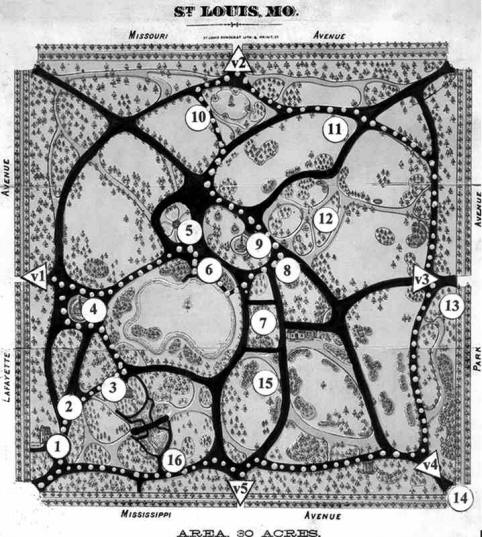 1) The Park House was built in 1867 for use as a police station. It now serves as a space for neighborhood meetings.

2) This circular horse watering trough was converted to a planter by the end of the 1800’s.

3) The Elizabeth Cook Pavilion is the second one built on this site. The original rustic “summer cottage” had a thatched roof.

4) Bronze casting from a life-sized statue of George Washington by French sculptor Jean-Antoine Houdon was placed in the park in 1869.

5) The 1876 Music Pavilion was destroyed by the 1896 tornado. A second music stand, built on the surviving base, was demolished in 1951. Only the original base remains.

6) Victorians could float around the Main Lake in swan boats. The swan house and fountain are reproductions of the Victorian originals.

7) The Comfort Station or Boathouse, (now Kern Pavilion) was built in 1908.

9) The Thomas Hart Benton statue, sculpted by Harriet Hosmer and dedicated in 1868, was the first public monument in the State of Missouri.

(10) The Rock Garden grows amid mineral blossom (drusy quartz.) that once defined the edge of a lake featuring three fountains and a waterfall.

11) This stone urn was pictured in stereoscope views of Lafayette Park from the 1870’s.

12) The ball field was a military parade ground in 1858. Colonel Thornton Grimsley, a noted manufacturer and city alderman trained a volunteer militia there.

13) Iron fence built in 1869. Note areas of the original rip rap drains along the Missouri and Park Avenue fence lines.

v4) Looking Northeast at Mississippi and Park Avenue is the commercial center of Lafayette Square.

14) Stately iron and stone gates erected in 1869. The fence and gates were designed by Francis Tunica.

16) The Rock Garden grotto was built in 1866. Only one iron bridge remains of two that replaced rustic bridges lost in the Cyclone of 1896.

This map is also available as a printable pdf, here:

There are no upcoming events at this time.
See All Events